BOBBY TO STEP ON DARTS’ MOST FAMOUS STAGE 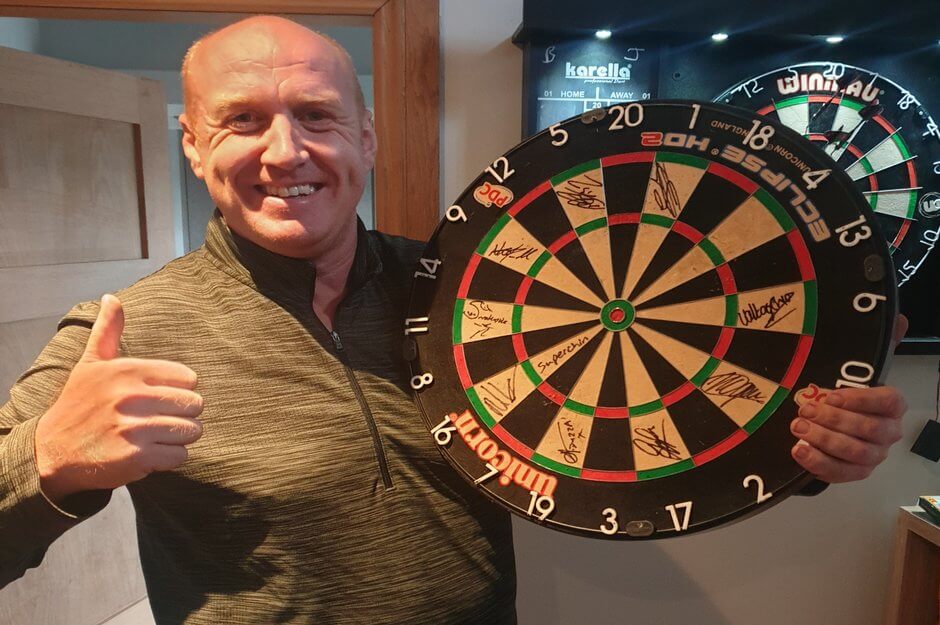 A landscape gardener from Scotland is looking forward to throwing darts on the sport’s most famous stage after winning an auction prize organised by the team at Selco.

We utilised our partnership with the Professional Darts Corporation to offer our 2020 nominated charity, Global’s Make Some Noise, a bumper darts package as an auction lot.

The package included playing a nine-dart challenge with a guest on the famous Alexandra Palace stage at this year’s World Darts Championship – as well as walk-on music as they take to the stage and professional match officials.

The winner also received two VIP tickets to watch the darts, a behind-the-scenes tour of Ally Pally, a chance to meet darts stars, a signed PDC dartboard and other merchandise.

The lot brought in a fantastic £3,200 for Global’s Make Some Noise and was won by darts mad Bobby Arbuckle.

Bobby, who lives in Bonnybridge, is planning to take his 14-year-old son Rio onto the stage with him.

“I was absolutely delighted to win the auction – it’s an amazing lot,” said the 42-year-old Peter ‘Snakebite’ Wright fan.

“I was due to go to the World Darts Championship last year but then things got in the way and the wife wouldn’t let me!

“This will be my first trip and I can’t wait to play on the stage. Sometimes I’m not a bad player and other times I’m not so good, so we’ll see how I fare on the day. I’ll be nervous, but it’ll be an amazing experience.”

Bobby has already received his signed dartboard, which he has had framed and put up next to other sports memorabilia.

The auction was part of Global’s Make Some Noise Emergency Appeal, which has raised over £1.7m.

Global’s Make Some Noise - which is backed by some of the country’s largest radio brands including Heart, Capital, Radio X and Smooth - is a national charity that funds and empowers projects helping disadvantaged children, young people and their families.

The focus is on providing a voice to small charities which otherwise struggle to get heard.