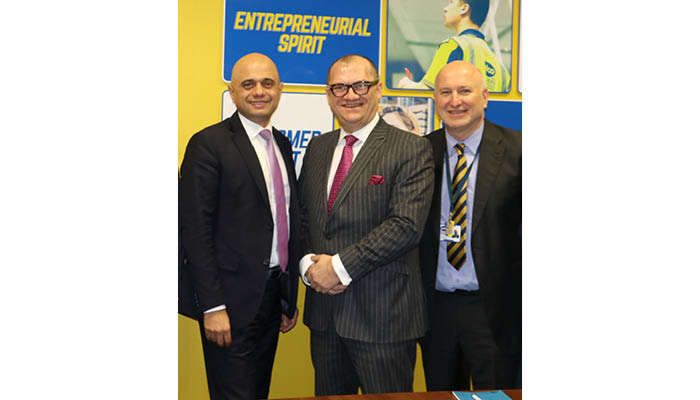 MP for Bromsgrove and Home Secretary Sajid Javid was a special guest at the head office of Selco Builders Warehouse during his latest rounds of constituency visits.

Mr Javid paid a visit to the Wythall headquarters of one of the UK’s fastest growing builders merchants.

Gavin Slark and Howard Luft - chief executives of Grafton Group and Selco respectively -both met with Sajid, with a variety of topics on the agenda.

Mr Luft said: “It was a very encouraging meeting. Mr Javid was interested in finding out more about our ambitious growth plans for 2019 and beyond and learning more about Selco as a business.

“Inevitably given the current climate, there was a discussion around Brexit and in particular in relation to the continued employment and recruitment of EU nationals after the UK’s withdrawal.

“It was a chance to raise our concerns about being able to attract and recruit enough new colleagues to fill vacancies in the building products distribution sector, and it was pleasing to hear Mr Javid commit to maintaining open dialogue with businesses in the coming months.”

Selco has 66 branches across the UK, with plans to open up to four more during 2019 and continue the expansion programme in the coming years.

Mr Javid said: “I was delighted to visit Selco – a major employer in my constituency - and witness the work of a significant success story for the UK economy.

“The company has enjoyed very impressive growth in recent years, creating hundreds of jobs right across the UK in the process, and it was encouraging to hear the exciting plans that are in place for that expansion to continue.

“I enjoyed a wide-ranging discussion with Gavin and Howard and it’s important as a government that we continue to have open lines of communication with businesses such as Selco during what is a vital period for the UK’s long-term future.”