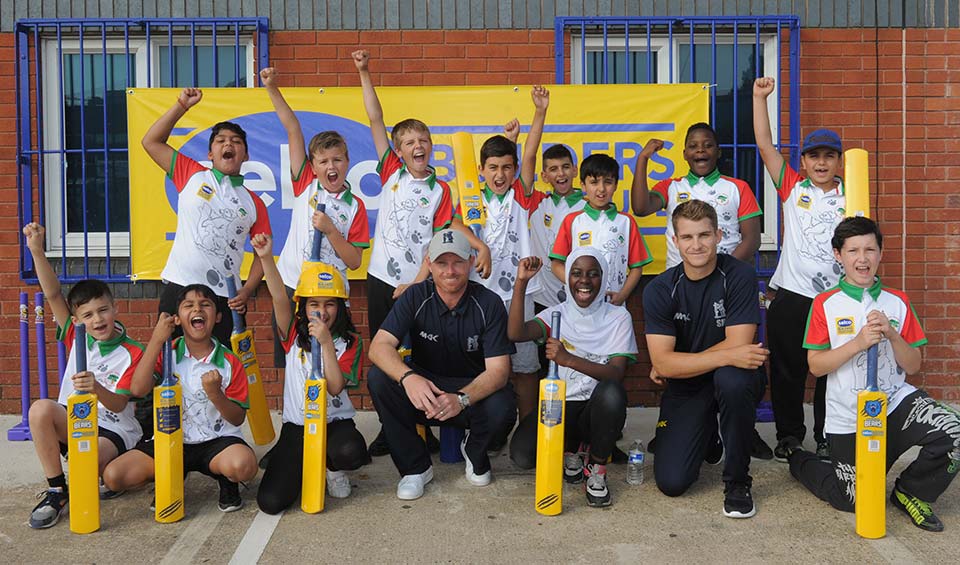 Warwickshire’s cricket stars warmed up for this weekend’s big domestic cup final appearance at Lord’s by delivering a masterclass to primary school children at a leading builders merchant.

The Chance to Shine Street cricket coaching session took place on the car park of the Selco branch on Austin Drive, with Sam Hain, Chris Wright and Josh Poysden joining their skipper coaching the excited 10 and 11 year-olds.

The event was held to mark Warwickshire reaching the Royal London One-Day Cup final in which they will face Surrey at Lord’s on Saturday.

Ian Bell said: “It’s a big week for us and getting out into the community to coach youngsters is a fantastic way to start it.

“There were some talented players there and, who knows, one or two of them might be Warwickshire stars of the future.

“We are all really looking forward to Saturday, it’s a big day for the entire club and hopefully we can get the right result and make it a day to remember for the supporters.”

Simon Humpage, marketing manager for Selco Builders Warehouse, said: “We were thrilled to host the Warwickshire players and children from Little Heath Primary School. It was a perfect way to end our second year of being the major sponsor to Warwickshire County Cricket Club.

“We all have our fingers crossed that Ian and the team can rise to the occasion at Lord’s on Saturday and win the Royal London One-Day Cup.”

Jonathan Sanders, year six teacher at Little Heath, said: “It’s not every day school children get coached by professional sportsmen and our pupils loved it.

“Hopefully it will encourage a number of them to take cricket up and try and improve their skills.”