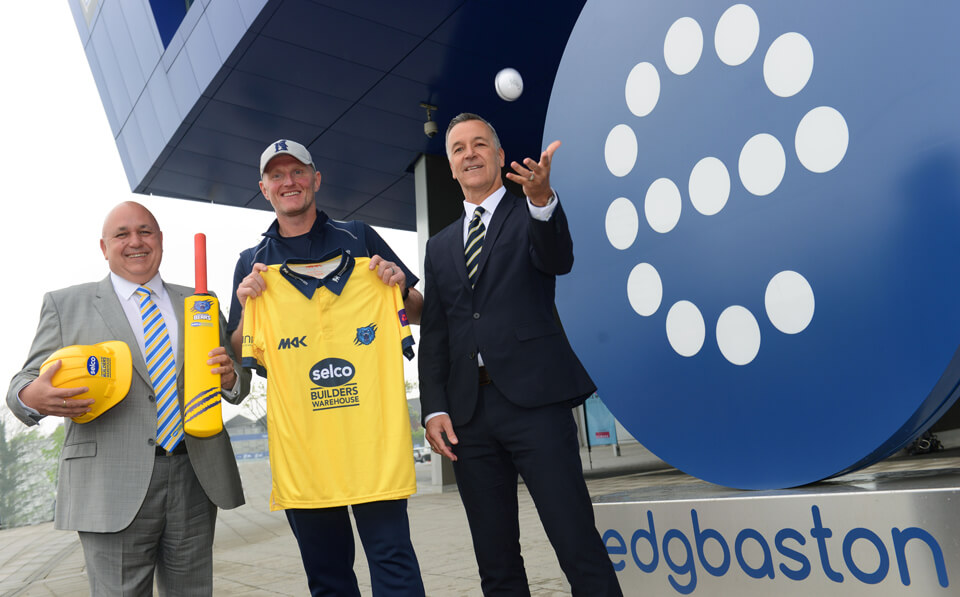 Warwickshire County Cricket Club has laid down strong foundations for the future by extending its partnership with Selco Builder’s Warehouse until the end of 2019.

The new package ensures that Selco will continue as the lead sponsor for the Birmingham Bears NatWest T20 Blast shirt and Warwickshire’s Royal London One-Day Cup shirt, in addition to partnering on several community initiatives.

The agreement extends Selco’s long association with elite sport in the UK and recognises the company’s strong Birmingham and West Midlands roots. Selco was formed in the Second City, which is the home to its support centre while there are seven branches in the West Midlands.

Chris Cunliffe, Selco Chief Executive, said: “This is exciting news for both us and Warwickshire CCC

“We joined forces at the start of last year and have achieved a huge amount together.

“On the field, Birmingham Bears reached Finals Day of the NatWest T20 Blast for the second consecutive season and, off the field, we combined on several community initiatives to give back to supporters.

We have a number of exciting initiatives planned for this year and with the Bears boasting such a strong squad, we are looking forward to the 2016 campaign and the seasons to follow with great anticipation.”

Last season the Club and Selco launched the Edgbaston Classroom to enhance awareness of cricket within school.

Pupils were asked to design a cricket shirt, with the winning design by Coventry school pupil Rajmeet Chopra being produced for a whole class in her school. It was delivered in person by Warwickshire and Birmingham Bears star Keith Barker and coach Andy Turnbull following a cricketing masterclass for Year Six pupils.

In addition, Selco and Warwickshire combined to give fans an opportunity to win tickets to Edgbaston’s Investec Ashes Test Match and NatWest T20 Blast Finals Day. The partnership also raised more than £6,000 for Selco’s nominated charity, Macmillan Cancer Support, through a special promotion at one of Birmingham Bears group games.

Gareth Roberts, Commercial Director of Warwickshire CCC, said: “Selco have been fantastic partners and the activation has bolstered our community programme, which supports schools and clubs in Birmingham and across the wider county of Warwickshire.

“We’re thrilled to sign this extension just one year in to the partnership. Not only does it continue our shared community programme and support for Birmingham Bears, but it ensures that Selco can be part of one of the biggest programmes of international cricket at Edgbaston, which includes 35 major match days with an Investec Test Match each summer until 2019.”