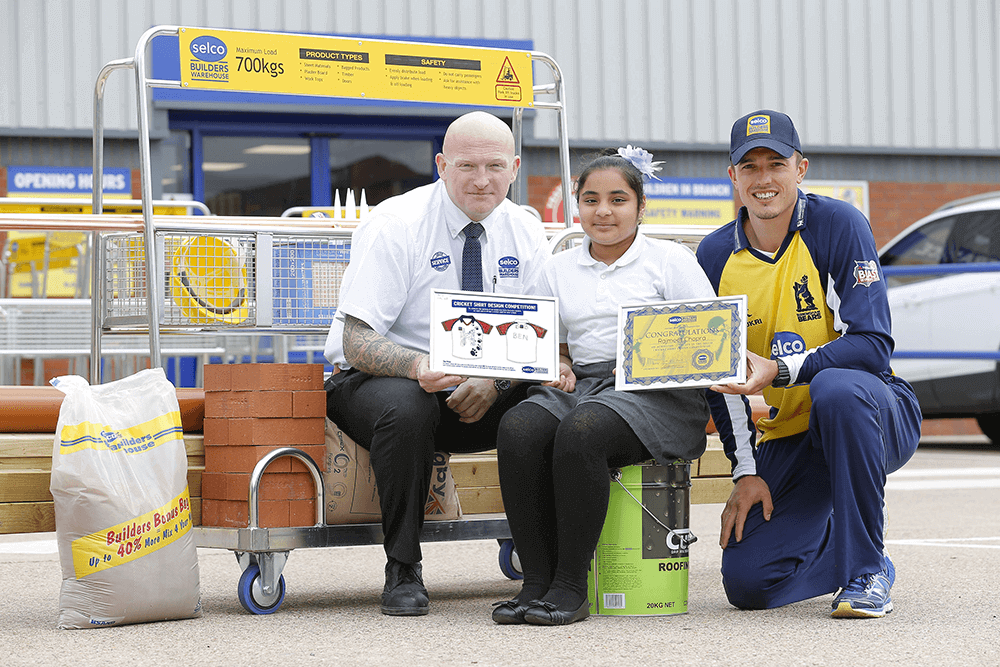 A schoolgirl from Coventry has had the honour of opening a new builders’ warehouse after proving her skills in a special design competition organised by Selco and Edgbaston Classroom.

Rajmeet was selected after five local schools were tasked with creating their very own Birmingham Bears cricket shirt whilst undertaking sessions at Birmingham Bears’ Edgbaston Classroom facility thanks to Selco’s sponsorship of the Bears this season.

Rajmeet’s design was chosen as the standout entry and she will now see her winning design professionally made and presented to Little Heath Primary School. She will also receive £100 worth of Amazon vouchers and the school is being gifted 200 tickets to watch Warwickshire vs. Glamorgan at Edgbaston on the 3rd August.

Mr Ward, Year 6 class teacher at Little Heath Primary School, said: “It has been a pleasure to link up with Selco Builders Warehouse for its latest launch in Coventry.

“The shirt design competition got a fantastic response from our pupils and we are proud that Rajmeet was chosen in such a tough competition.

“I would like to congratulate her on a fantastic achievement and we thank Selco for the opportunity to get involved and enabling many pupils to attend their first cricket match.”

Chris Cunliffe, Selco Builders Warehouse’s chief executive, said: “It was great to see Rajmeet and cricketer Richard Jones opening our Coventry branch, as we continue to engage and support the local community wherever possible.

“We are delighted to have opened in Coventry, further extending Selco’s strong links in the West Midlands.

“The creation of more than 50 jobs is something we are all very proud of, as it will be of huge benefit to the local economy. Selco’s policy has always been to employ as many people as possible from the branch’s local area and this is something we wanted to repeat in Coventry.”

Brian Kemp, branch manager for Selco Coventry, said: “Preparations for the new branch have been ongoing for several months and we are pleased to now be officially open for business.

“We have assembled a very strong and dedicated team and are confident we can offer a first-class service.”

As with all Selco branches, there is an in-branch café, trade services, direct-to-site delivery options and van size parking spaces, all designed to make it easier for tradespeople to get onto the job as soon as possible.