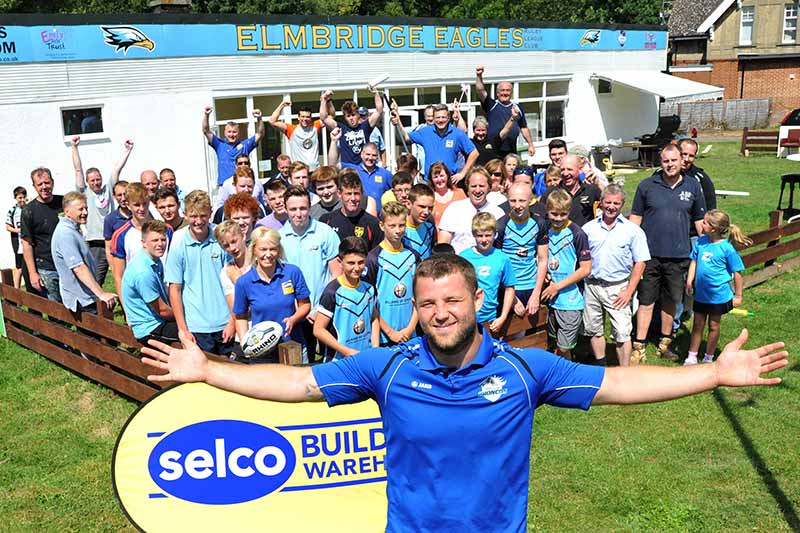 Elmbridge Eagles, in Esher, was selected as the winning applicant in a competition offering one rugby league club the chance to win a makeover from Selco Builders Warehouse. The competition was run in conjunction with Super League club London Broncos, which Selco has sponsored for the last three years. Elmbridge, who are rebuilding having been badly affected by floods last winter, was selected as the winning club from a host of applicants. Selco, donated materials and manpower for the makeover, while a host of Broncos players took advantage of a rare weekend without a game to assist with the work. Amongst the Broncos players who helped with the renovations and carried out training sessions for Elmbridge’s junior players were Josh Drinkwater, Nick Slyney, Ben Farrar, George Griffin, Matt Cook, Olsi Krasniqi and Alex Foster. Elmbridge Eagles Rugby has one senior team which plays in the London Men’s League and three junior teams. The club, which celebrates its 20th year next season, went through an extensive renovation last winter but this year was badly affected by the record-breaking rainfall. Thousands of pounds had to be spent to repair the flood damaged clubhouse, including costly roof repairs. Chairperson Charlie Tavener said: “The flooding left us in real trouble with no money, no bar, no kitchen, no changing rooms, no storage cupboards and inadequate internal doors so we are hugely grateful to Selco Builders Warehouse and London Broncos. “They have come to our rescue in our hour of need and it is hugely appreciated by both the club and the local community.” Work on the day included painting and digging, hanging new doors, fixing the skirting boards and installing new benches in the dressing rooms. The prize also included 100 tickets to a Broncos match for Elmbridge Rugby Club. Helen Gemmell, marketing director of Selco Builders Warehouse, said: “We developed the makeover project in conjunction with the London Broncos as part of our sponsorship of the club. “One of the principle aims was to make a positive impact on the community so we were delighted to assist Elmbridge after their recent troubles. “It was a fantastic day with club volunteers, players from the London Broncos and representatives of Selco all pulling together to make a real difference. “We were delighted to provide materials and manpower for the project and hope it will help Elmbridge create a real platform for the future.” London Broncos general manager Jason Loubser said: “All the lads who attended enjoyed supporting Selco Builders Warehouse and Elmbridge Eagles, both with the makeover and with training sessions for juniors. “We are really pleased to be helping rugby league in the London area as that is a real priority for everyone connected with London Broncos.